Home » Blog » What Is Cryptocurrency? 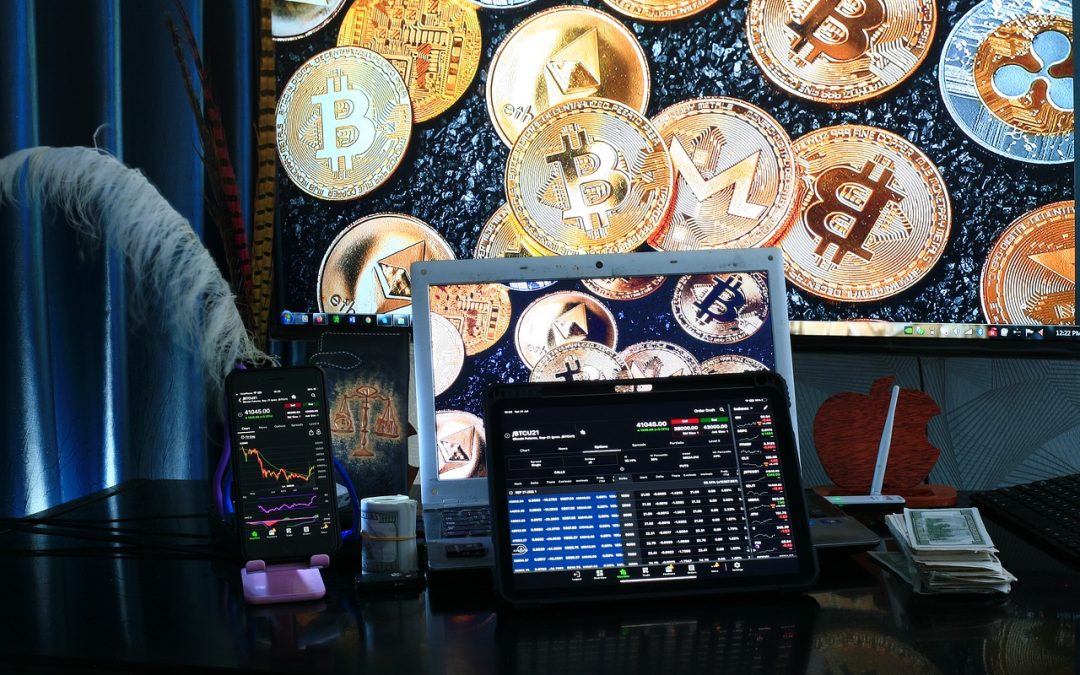 Learn What Crypto Is, How It Works, Why People Invest In It, And How Crypto Interacts With NFTs

(All in a five minute read!)

Cryptocurrencies are similar to traditional currencies you already use, with one key difference. They are entirely digital. Cryptocurrency is often referred to as internet money.

Did you know you already use digital currency?

According to a 2021 Harvard Business review piece, over 97% of the money in circulation is from online transactions.

Cryptocurrencies consist of a combination of numbers and letters.

The combination of letters and numbers on a dollar bill record which year the bill was issued and where it was printed. Central banks keep a record of this information.

How Does Crypto Work?

Each cryptocurrency is uniquely identifiable by its combination of letters and numbers.

Almost all cryptocurrencies can also be divided into smaller amounts. For example, one bitcoin can be divided into 100 million pieces. Each piece of bitcoin is called a Satoshi, which is equivalent to cents in a dollar.

Originally, crypto refers to cryptography. Cryptography, is used to protect information and communications by using code. Cryptography allows a secure message to be sent that only the sender and recipient can read.

Cryptocurrencies use cryptography which allows transactions to be secure, trustless, and anonymous.

Trustless means the sender does not need to trust a third party like a bank, credit card company, or middleman. They send the digital currency securely and directly to you without hindrance from a third party.

Most cryptocurrencies are sent and received within seconds (depending on the blockchain you use,) and the transaction fees are often less than one cent.

Why Do People Purchase Cryptocurrency?

People buy cryptocurrencies for many reasons.

To Purchase Products And Services

Over the past few years, we have seen more businesses, including famous brands, accept bitcoin and cryptocurrencies as a form of payment.

You can use bitcoin and cryptocurrency to purchase flights and hotels, laptops, property, gold, jewelry, fashion items, electronics, furniture, and more.

This trend will continue.

Crypto has become a trillion-dollar asset class. Billionaires, hedge funds, banks, and individuals all speculate on the price direction of bitcoin and altcoins. It is similar to FOREX trading.

As A Store Of Value

Wealthy investors purchase bitcoin as a form of digital gold. Bitcoin is free to store, whereas, with gold and silver, you need a storage and insurance solution.

Bitcoin can also be moved worldwide within seconds, which is attractive compared to how difficult it is to transport gold.

Although bitcoin and Ethereum can have wild price fluctuations, the trend for many years has been up.

Some altcoins and liquidity platforms reward crypto holders with a healthy monthly return. You can earn as high as 10% APR with some cryptocurrencies.

Although many cryptocurrencies are trackable on a blockchain, unless you know the physical owner of a digital wallet – it is possible to remain anonymous.

Wealthy individuals have used cryptocurrencies to hide a portion of their wealth, especially from governments and spouses during divorce.

Hackers and scammers have been successful in utilising cryptocurrencies to hide their identities and receive money from their victims.

Here is a chart of the cryptocurrency market cap since 2013. The market as a whole has risen from a billion dollars to over $2.5 trillion in 2021. This is remarkable in less than ten years!

How Do Cryptocurrencies Interact With NFTs?

Although you can purchase an NFT using a credit or debit card on some NFT marketplaces, the most popular method is using a cryptocurrency.

The most popular cryptocurrencies used to purchase NFTs are:

This is the most popular cryptocurrency used to purchase an NFT.

This is the second most popular cryptocurrency used to purchase an NFT.

NFT investors use stablecoins to interact with purchasing other cryptocurrencies, especially when they sell an NFT and want to protect their dollar profits. They sell their NFT into ethereum and then convert ETH into USDC.

Many NFTs allow staking and reward you for doing so.

Some NFT collections use their native token (cryptocurrency), and holders receive a small income from this token.

Usually, you can sell this token on an exchange into a stablecoin, ETH, and SOL.

Some NFT collections allow a revenue share. The rewards are sometimes received in a popular cryptocurrency like Ethereum or Solana.

We hope you enjoyed reading this article, visit our crypto and NFT blog for more articles.

Would you like to learn where to spend your cryptocurrency, or learn more about this fascinating topic?

Visit us today at spendingcrypto.com

Deway Media is a digital marketing agency for NFT and crypto businesses. We make your business go viral!